The Greek Gift: : Politics in a Cypriot Village Peter Loizos 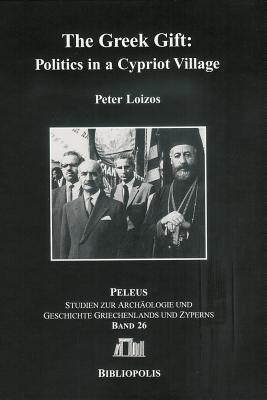 Cyprus, under British rule, had permitted the Greek and Turkish Cypriots only limited experience of democratic participation in national politics. The last five years of colonial rule in Cyprus [1955-1960] witnessed a major struggle by Greek Cypriots for freedom - by which they meant, a political Union with Greece, a goal which had obsessed them since the turn of the century, but which had alienated Turkish Cypriot nationalists.Independence in 1960 was soon disrupted by violent conflict between Greek and Turkish paramilitaries, and the retreat of many Turkish Cypriots into enclaves, both defensive and secessionist.The village described here, [later identified as Argaki, near Morphou in W.

Cyprus, ] had produced an active unit of anti-British guerillas, members of the underground organization EOKA, led by Col. George Grivas. It had acted as a hiding place for EOKA fighters dodging the British, men like Nikos Sampson, and Nikos Koshis. It was also a mixed village, with a large Greek majority, the subjects of this study, and a small Turkish minority.

Twenty five miles from the capital, prospering from irrigated agriculture, the village found itself intensively caught up in the rivalries between Greek nationalist leaders. President Makarios, Interior Minister Polykarpos Yorgadjis, [later assassinated] Glavkos Clerides, [later President] Dr.Vassos Lyssarides, and Nikos Sampson [a president imposed by the Greek dictatorship] are all major actors on the national political stage, but they are also connected by ties of friendship and political patronage to their Argaki clients - the village political activists who have variously identified with these national figures, but find that when the big men start to quarrel, the effects are felt disturbingly at the village level.

Men who might otherwise be helping each to prosperity and planning to see their children marry each other, find themselves at each others throats, and only the skillful diplomacy of the more far-sighted village leaders keeps the village from tragedy.While giving his lively first-hand account of a single village, Loizos is compelled to place the political processes he documents within the wider context of national and international politics.

This book has been required reading for specialists on Cyprus, when they sought to understand how Greek-on-Greek political passions played out at the grass roots level. The Greek military dictatorship [1967-74] casts its shadow over these pages, recruiting young villagers to overthrow their elected President. Cold War rivalries between NATO and the USSR also play their part. The village cannot be isolated from decisions taken in Athens, m Ankara, Moscow, Washington and London, but could village activists really understand how high the stakes were in the games they were playing?

The book ends shortly before the 1974 Greek coup against Makarios and subsequent invasion by Turkey, which turned these prospering villagers into refugees, the subjects of a subsequent study The Heart Grown Bitter.Peter Loizos book is one of the few classics of the Cyprus Problem studie

Comments
Comments for "The Greek Gift: : Politics in a Cypriot Village":