To Promote, Defend, and Redeem: The Catholic Literary Revival and the Cultural Transformation of American Catholicism, 1920-1960 Arnold Sparr 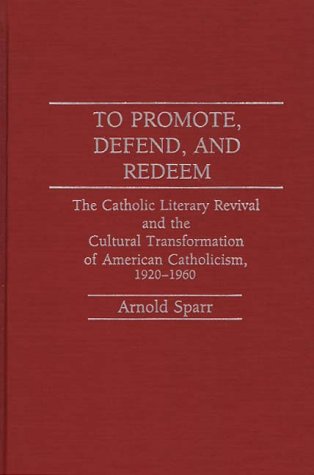 The Catholic literary revival in America refers both to the impact of the modern resurgence in European Catholic thought and letters upon the American Church between 1920 and 1960, and to efforts by American Catholic educational and literary leaders to induce a similar flowering of Catholic life and culture in their own country.

Arnold Sparr examines those areas of Catholic thought and culture that most concerned educated American Catholics, critics, and cultural leaders between 1920 and 1960: the renaissance in Catholic literary, theological, philosophical, and social thought- its application to modern economic, social, and intellectual problems- and the growth and development of the twentieth century Catholic novel.

He divides the book into three sections, each corresponding to separate phases of the American Catholic literary revival. Organization and Development, 1920-1935 treats the socio-cultural antecedents of the revival and the self-conscious attempts of the revivals early Jesuit leaders to build a Catholic intellectual presence in America. Part two, Transformation, 1935-1955, addresses the shift in Catholic revivalist thought from the confrontational literary-philosophical postures of the 1920s and early 1930s to more positive understandings of Catholic faith and practice. Finally, Dissolution, the 1950s and After chronicles the eclipse of the revival, resulting from a reactivation of the Catholic intellectualism issues, increasing concerns about professionalism within Catholic academia, and liberal Catholic association of the revival with so-called ghetto culture.

Parts one and two conclude with chapters on the American Catholic novel- the search for the Great American Catholic novel, an important element of the revival, provides an organization framework through which to summarize and assess major trends in the larger cultural movement. This new work will interest scholars and students of American Catholicism, the Catholic church in the 20th century, and cultural and religious historians.

Comments
Comments for "To Promote, Defend, and Redeem: The Catholic Literary Revival and the Cultural Transformation of American Catholicism, 1920-1960":