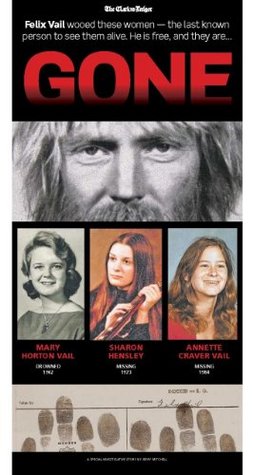 The two women that disappeared were last known to be alive in Sulphur, La., where they were with Felix Vail at the time he was visiting his late sister.Award-winning investigative reporter Jerry Mitchell went on the trail of Felix Vail, asking the important question: What are the odds of a man having a wife drown, another wife disappear and a common-law wife disappear?“Smaller than the threshold of chance,” said James Alan Fox of Northeastern University, one of the nation’s leading criminologists.

“Either he tends to select partners that lead higher risk lives or something else is going on that’s more nefarious.”“Jerry Mitchell is the most distinguished reporter in the entire country, an ornament to the profession and a model for any young person who ponders whether or not to enter our business, a reflection of what one reporter with a conscience can do. I simply marvel at him and what he has done.”— The late David Halberstam in 2005Author Jerry Mitchell has been called a loose cannon, a pain in the ass and a “white traitor.

Whatever he’s been called, Jerry Mitchell — a MacArthur genius grant winner and Pulitzer Prize finalist — has never given up in his quest to bring unpunished killers to justice.In his latest work, Mitchell has tracked the acts of suspected serial killer Felix Vail across the country and found evidence of foul play in the drowning of his first wife, Mary, in Lake Charles, La.So far, the stories of the 53-year-old investigative reporter, who has worked for The Clarion-Ledger in Jackson, Miss., since 1986, has helped put four killers behind bars, including the imperial wizard of Mississippi’s most violent KKK group, the assassin of NAACP leader Medgar Evers and the Klan leader who orchestrated the 1964 killings of James Chaney, Andrew Goodman and Schwerner (popularized by the fictional film about that case, Mississippi Burning).For his work, Mitchell has received more than 30 national awards, including the prestigious George Polk Award twice.

In 2006, the Pulitzer Board named him a Pulitzer Prize finalist, praising him “for his relentless and masterly stories on the successful prosecution of a man accused of orchestrating the killing of three civil rights workers in 1964.”In 2009, the MacArthur Foundation named Mitchell a MacArthur fellow for his work, becoming only the second investigative reporter to ever receive the $500,000 award.Mitchell has been interviewed on all the major network and cable television programs, most recently appearing on The Colbert Report.Others have noticed his work. In 1996, the film, Ghosts of Mississippi, depicted him and his work, leading to the reopening of the Medgar Evers case.

Two years later, he was honored along with three other journalists at the Kennedy Center in Washington.He is currently writing a book for Simon & Schuster titled Race Against Time on his pursuit of these unpunished killings.