From Jamestown to Jefferson: The Evolution of Religious Freedom in Virginia Paul B. Rasor 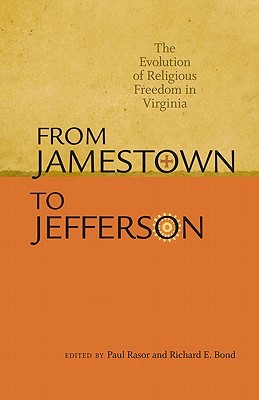 From Jamestown to Jefferson sheds new light on the contexts surrounding Thomas Jeffersons Statute for Religious Freedom--and on the emergence of the American understanding of religious freedom--by examining its deep roots in colonial Virginias remarkable religious diversity. Challenging traditional assumptions about life in early Virginia, the essays in this volume show that the colony was more religious, more diverse, and more tolerant than commonly supposed.

The presence of groups as disparate as Quakers, African and African American slaves, and Presbyterians, alongside the established Anglicans, generated a dynamic tension between religious diversity and attempts at hegemonic authority that was apparent from Virginias earliest days. The contributors, all renowned scholars of Virginia history, treat in detail the complex interactions among Virginias varied religious groups, both in and out of power, as well as the seismic changes unleashed by the Statutes adoption in 1786.

From Jamestown to Jefferson suggests that the daily religious practices and struggles that took place in the town halls, backwoods settlements, plantation houses, and slave quarters that dotted the colonial Virginia landscape helped create a social and political space within which a new understanding of religious freedom, represented by Jeffersons Statute, could emerge.Contributors Edward L.

Comments
Comments for "From Jamestown to Jefferson: The Evolution of Religious Freedom in Virginia":