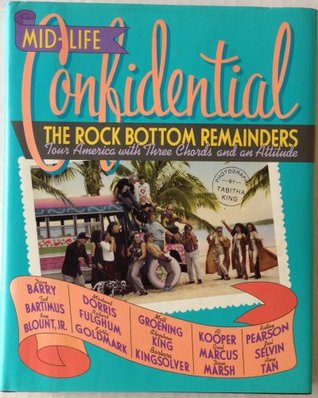 I really enjoyed this book, probably a little more than my 3 star review indicates, but there is one big negative (in my opinion)that bugged me a lot.Ill tell you the negative in a minute, but first I want to explain the premise of the book, and also mention some positives.This is the story of The Rock Bottom Remainders, a band made up of a dozen or so best selling authors including Stephen King, Dave Barry, Amy Tan, Greil Marcus, and many others.

The book chronicles their formation for a one-time-only gig, and the subsequent 10 day tour that followed. Each of the writers in the band take a turn writing a chapter to tell the stories of what happened on the tour bus, and in the clubs they played during that 2 week period traveling the east coast.The positives: Lots of great anecdotes, mostly funny, but sometimes serious, from some of the best storytellers in America. These stories dont always have to do with the band, but rather personal recollections of past events in their lives, and how they relate to why they are in the RBRs.

These were my favorites:King battling a stomach ailment an hour before showtime reminds him of the time he almost drown as a child.Amy Tan, as a teenager, trying to find ways to rebel against her strict Chinese parents.Dave Barry hilariously telling the story of the ups and downs of his college band, Federal Duck.Most touching was Dave Marsh telling the story of his daughter Kristen, who died of a rare cancer in her early 20s.

and how the band helped him get through the despair.Thats just a few, but there are lots of others that are equally as interesting.So what could be wrong with this book you ask...Repetition. Repetition. Repetition. Did I say repetition?Each of the authors try to add their own touches and style to the anecdotes, but after a while hearing the same stories over and over again got to be a bit boring for me, including:How publicist Kathi Goldmark formed the band.The frustration, but ultimate respect, of music director/band leader Al Kooper.Amy Tans dominatrix outfit while she sang These Boots Are Made For Walking.The legal issues surrounding the Dave Barry/Stephen King version of the 50s teen tragedy classic Tell Laura I Love HerDave Marshs nightly cross dressing....

and many moreThese tales of the road were humorous the first couple of times they were told, but after the fourth, seventh, or tenth times it was too much.On the other hand, Im a factory worker living in a little apartment with my pet cat, so who am I to criticize anything these superstars of literature do? If you want to read it dont let anything I say stop you. Im sure youll love it.