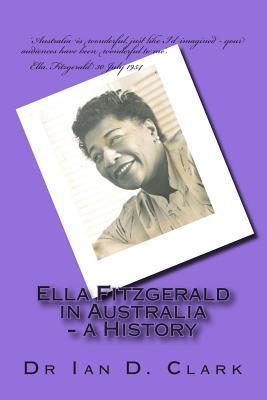 She first toured in July 1954 as part of Lee Gordons inaugural The Big Show. Her second tour in December 1960 included Verve stable mate Mel Torme, who was her supporting act. This tour was arranged by Melbourne night club owner Jim Noall and extended to the capital cities of the eastern seaboard and Adelaide. After completing her Australian commitments in early December 1960, Fitzgerald flew to New Zealand for her first tour there - this leg of the tour was promoted by Harry M.

Miller. Her next visit came in November 1970, according to an article in The TV Times, but very little has been discovered about this tour. Her final visit to Australia came in November - December 1978 when she performed in Sydney, Melbourne, Brisbane, and Adelaide, and in Perth for the first and only time in her career. In 1978 all the epithets used in the Australian print media to refer to Ella acclaimed her musicianship - gone was the earlier fixation on her colour and weight. Now she was Jazz Queen, Ella the great, First lady of song, worlds greatest popular/jazz singer, grand lady of jazz, majestic, and singing legend.

Ella Fitzgeralds 1978 Australian tour was a no-holds-barred celebration of her music and of her life. Australian audiences adulated Ella Fitzgerald. In the major biographies of Ella Fitzgerald, Australia does not feature prominently - in fact it barely rates a mention. The 1954 tour was overshadowed by the racist event that occurred in Honolulu, Hawaii, en route to Australia from California that saw her bumped from her first class airline seat. The 1960 Australian tour received scant attention in Fitzgerald biographies, and only one mentioned it in the context of her appearance at the inaugural gala for president-elect John F.

Kennedy. The 1970 and 1978 visits do not receive any mention in leading biographies. The work contains rare photographs, many of which have never been published before.

Comments
Comments for "Ella Fitzgerald in Australia - A History":