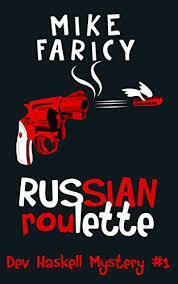 OR SO DANGEROUS...PI Dev Haskell wakes up one morning in dire need of an asprin, a cup of coffee, and an hour in the sauna. It seems hes just spent a wild night with his beautiful bombshell of a client, Kerri, and shes left him a note.

A smart and sly man who fancies himself just a little more savvy and debonair than reality confirms, Dev thinks hes got it made. But he has absolutely no idea what hes getting into when he agrees to track down Kerris sister Nikki. Turns out both women are involved in an elaborate human trafficking ring with Braco the Whacko, a notorious Russian mobster, at the helm. Soon Dev finds himself at odds with local police, Homeland Security, and an FBI task force, as well as in and out of the hospital thanks to a gunshot wound and a bit of shrapnel in the rear, not to mention on the run from a neurotic underworld boss and a psychotic killer: it must be love...In a bizarre but compelling mixture of crime and offbeat comedy, Dev proceeds to messily balance both sides of the law in a wacky tale that will keep you on your toes while laughing out loud.WHO WILL LIKE IT: Fans of Janet Evanovichs Stephanie Plum series, Tony Dunbars Tubby Dubonnet mysteries, the Chevy Chase Fletch movies, and Florida-zany authors like Carl Hiassen, Tim Dorsey, and Dave Barry--though not because this book is set in Florida--its just zany!